Edmonton, the “Oil Capital of Canada,” has been an economic hub of Alberta since the city’s foundation. Having reached an all-time high in exports in the last few years, Alberta has been enjoying great financial prosperity and, given its flourishing economy, it is attracting new international business prospects to the region. Many of them are of German origin, a community that has strong roots in the city. Today, more than 125,000 German speakers live in Edmonton, according to the 2016 census. So, there is no better time to learn German to appreciate fully the opportunities offered by the German-speaking market in Edmonton and throughout Canada. Contact us today, so we can offer a language package that suits your skills and schedule. 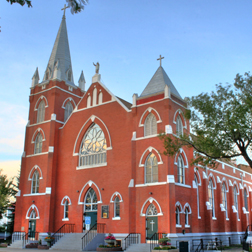 Why Study German in Edmonton

Learn German for Work: Considered one of the most influential languages in business, German is the first language of 100 million speakers worldwide. According to Canada’s 2016 census, there are over 400,000 Canadian citizens who declared German to be their native language. This huge number of Germans living in the city has led to a high number of German businesses operating in the city today. Taking German courses in Edmonton will give you the freedom to explore all the potential that Edmonton’s diverse economy offers, including potentially taking your career outside of Canada to pursue larger, international opportunities. If you are interested in getting a new job with a German company, why not contact the German Canadian Centre for Innovation and Research on Jasper Avenue? Founded in 2009, this is an initiative for the development of European-Canadian research and business relations. The centre provides support for the exchange of information, the development of networks and the establishment and cultivation of collaborative partnerships in academia, business and industry. They frequently organize events and talks with German native speakers, whom you will be able to understand after taking some lessons with us!

Learn German for Culture: There are many opportunities for experiencing the German culture in Edmonton. The German Canadian Cultural Association on Roaper Road commemorates the coming together of German and Canadian culture by hosting many traditional German festivals throughout the year. One of them is Edmonton Oktoberfest, a popular event which celebrates the true spirit of the beer festival alongside Canadian citizens. If you are more into the theatre, you can enjoy the International Fringe Theatre Festival, the largest, longest-running fringe festival in North America which serves as a global stage for artists and entertainers from around the world and attracts thousands of attendees. Thus, taking German lessons in Edmonton is a wonderful way of embracing the multiculturalism fundamental to the Canadian identity, allowing you to connect and interact with others in your community on a whole new level.

Learn German for Social & Food: Knowing some German will also help you make new friends. You may be interested in joining the Edmonton Stammtisch! German Language Meetup, a group of people who get together for casual German conversation over drinks after work every Friday evening. They welcome all levels of German fluency! And if you are more interested in getting a taste of German flavours, you can visit Haus Falkenstein at 111 Avenue, a fantastic restaurant that offers authentic German schnitzel, always freshly cut, hand-breaded and pan-fried. Another option is the Old Country Inn, at 72 Avenue, best known for their eggs benedict with real white wine hollandaise sauce, German bratwurst and pork schnitzel. After some classes with Language Trainers, you will be able to read all of these dishes and their ingredients off of the German menu!

Where to Learn German in and around Edmonton

Signing up to German classes in Edmonton with Language Trainers is an ideal way of enhancing your prospects. Our native German teachers will guide you to fluency with tailor-made lessons personalized to your schedules and needs. Your instructor can either meet you at your home or your office, the choice is yours! If you prefer neither, then you may have the class at a public place, such as the Edmonton Public Library on 88 Avenue NW, Tea Bar Café at 98 Street or Coffee Bureau on Jasper Avenue.

If you are not based in Edmonton exactly but would like to take a German course, we can still help. We have great instructors ready to start teaching in Beaumont, Fort Saskatchewan, Leduc, Spruce Grove and St. Albert.

What are you waiting for? Let’s go, lass uns gehen! Take one of our free online German level tests to test your abilities and then send us a quick inquiry to get started right away!

Sign up for our German lessons in Edmonton today! Schedule your lessons whenever you want them, so you can always find time to study, regardless of your timetable or location. You don’t even have to leave home to meet your teacher!

1-on-1 General German Course in Edmonton

Our general one-on-one courses in Edmonton will help students improve their German level quickly and efficiently, whatever their needs. One of the most exciting aspects of our courses is that they are developed entirely around the needs of the students. The fact that we offer our German classes on a One-on-One basis means that you can learn the words and phrases you need in a comfortable and relaxed environment.

1-on-1 Business German Course in Edmonton

Our German courses in Edmonton are taught on a one-on-one basis and will help you improve your business communication skills immensely. No matter what level you begin at we will soon have you dealing with business introductions comfortably before moving onto other matters. Beginner level students can expect to finish the course with basic telephone German and email skills, as well as a level of survival German, granting them the ability to work in a country where German is the native tongue.

Quick Inquiry: German courses in Edmonton
20868
people have taken our
German level test.
301
language teachers in Edmonton
are already registered with Language Trainers.
Start Learning
“”I chose Language Trainers as I found the company to be very efficient. I am really enjoying my classes with Britta; she is a wonderful teacher and person.””
Eileen Marshall
German course in Oakville
“”The lessons are going well. Ariel is a pleasure to work with. His knowledge of the German language is quite extensive.””
Rob Purves
German course in Windsor